A lasting connection needs more than simply surviving a winter together—they’ll have to outsmart danger, let down their defenses and open their hearts.

Owen Han has a fresh lease on life—he’s kicked cancer’s ass and is roaring through his bucket list. The former investment banker hopes to find his next challenge in Alaska, volunteering alongside park rangers and fulfilling his childhood dreams of snowy winters and rustic life. Of course, those dreams did tend to feature big strapping mountain men in vivid detail…

Ranger Quilleran Ramsey would like to be anywhere other than dealing with newbie volunteers. And really, the only thing he needs less than a green volunteer “partner” is the flirty attentions of a buff city boy who doesn’t look ready to last a week, let alone an Alaskan winter. They’re all wrong for each other, even if Quill’s traitorous body enjoys the flirting more than it should.

As the weeks pass, the two snowbound men give in to temptation. But can their seasonal romance last until spring? For them to have a future together, each will have to trust the other…while hoping that the harsh elements and omnipresent dangers don’t destroy what happiness they’ve found in the moment.

One-click with confidence. This title is part of the Carina Press Romance Promise: all the romance you’re looking for with an HEA/HFN. It’s a promise!

Cards fluttered to the floor as Owen looped his arms around Quill’s shoulders, pulled him closer. Unlike their first kiss, he seemed content to let Quill lead, let Quill plunder his mouth until they were both breathing hard.

“Oh, hello.” He grinned up at Quill, and this would be the perfect moment to pull away, regain his sanity, but Quill didn’t. Couldn’t. Was rooted to the damn couch, awkward angle looming over Owen and all.

“Don’t you dare apologize. If I said I was cold, would you warm me up?”

“How cold?” Quill, who didn’t flirt, was doing a damn good approximation of it, voice still low and husky and the word no nowhere near his lips.

“Very.” Owen pulled him down for another kiss, and Quill let himself slide that much closer to hell. And if he was going to be damned, if he was going to let go of professionalism for the sake of a kiss and try to fly instead of sticking to safe zones, then it was going to be a good kiss, one that let him taste as much of Owen as he’d been craving.

Slowing down from his initial attack, he took his time, exploring the curve of Owen’s full lower lip, tongue detouring to trace his devastating dimples before seeking entry to his mouth. As their tongues tangled together, Owen hooked a leg around Quill’s calf, urging him with his hands and legs to fall more completely on top of him.

“Fuck.” Quill had to groan as their bodies met, torsos aligning, Owen wiggling about until their groins were rubbing right along with their tongues, a subtle rocking that mimicked the slow dance of their mouths. Quill might have not spent the past twenty years entirely celibate, but it had been so damn long since he’d made out like this, kissed and kissed with no end in sight, no end goal, that he felt like parched August earth, needing Owen like a garden needed rain, soaking up everything he had to give.

Q: Does one of the main characters hold a special place in your heart? If so, why?

AA: Both characters, Quill and Owen, are special to me for different reasons. Quill, my grumpy park ranger, is special to me because he’s a more mature hero, but he’s also unaware of the extent of his own loneliness. Giving Quill the HEA he deserves was immensely satisfying. Owen, my optimistic new volunteer assigned to Quill, is special because he represents a character that I’ve wanted to do for a long time—one who survived a major medical scare and now has a second lease on life and is determined to make the most of each day.

Q: What was the inspiration for the story?

AA: My amazing critique partner and best friend, Wendy Qualls, came to me with the idea of how in remote areas, park rangers are often snowed in together for months at a time. I loved the idea immediately, and we started brainstorming. I brought in a lot of my favorite tropes—opposites attract, age gap, close proximity, building friendship, adventure, working together, and more as the plot started to take shape for me. Then later, I came up with the idea of making it series set in Alaska, and worked that plot bunny into the series. Book Three seemed to fit best for this one, so that’s where it landed, but initially it was the first plot bunny, and everything else sprang from that one.

Q: What is the key theme and/or message in the book?

AA: Love finds us where we least expect it, but most need it. Neither Owen nor Quill expects to find the love of their lives when they’re snowed in together for an Alaskan winter, but love has a way of finding people when they need it most and of healing old wounds and giving fresh courage. I really wanted to show how love can provide the best fresh start of all, even when we stay in the same place we’ve always been or when we venture thousands of miles out of our comfort zone—love finds those who need it most.

Q: What is the significance of the title?

AA: ARCTIC HEAT is actually the coldest book in the series—tons and tons of snow and snowed in fun. The heat totally comes from the chemistry between the main characters!

Q: If you had to describe the main characters in three words, what would those three words be?

AA: As the story opens, Quill is grumpy, lonely, and loyal. He’s grumpy about being assigned a new volunteer, lonely from long hours alone and with his BFF now assigned elsewhere, and he’s loyal to his job. Meanwhile, Owen is optimistic, fun, and adventure seeking. He’s an optimist who survived a health scare and now is seeking fun and adventure in Alaska. 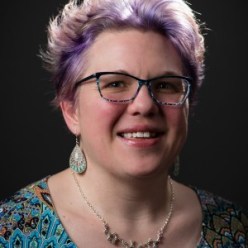 Annabeth Albert grew up sneaking romance novels under the bed covers. Now, she devours all subgenres of romance out in the open—no flashlights required! When she’s not adding to her keeper shelf, she’s a multi-published Pacific Northwest romance writer.

Emotionally complex, sexy, and funny stories are her favorites both to read and to write. Her critically acclaimed and fan-favorite LGBTQ romance series include the #FrozenHearts, #OutOfUniform, #Gaymers, #PortlandHeat, #RainbowCove and #PerfectHarmony series.

Also, be sure to sign up for her newsletter for free ficlets, bonus reads, and contests. The fan group, Annabeth’s Angels, on Facebook is also a great place for bonus content and exclusive contests.

Open Internationally, must be 18 to win. 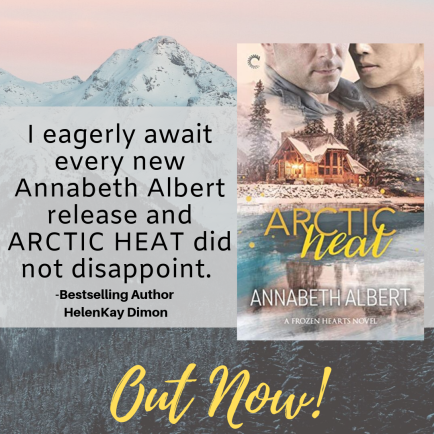