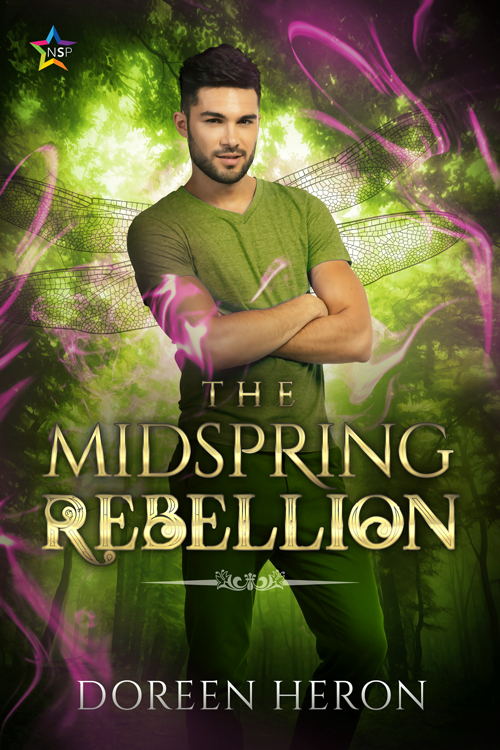 Things are amiss in the fairy court, made worse one spring morning when King Oberon’s wife decides to leave him.

His decision to gather his thoughts in the human realm lead him into the path, and arms, of workaholic human Nick Chandler.

But when Oberon’s throne is threatened, will he be able to retain his kingship and his newfound love?

Chapter One
As it always did, the Wheel of the Year continued to turn.

The seasons changed. The years changed. But life in the Fairy Court remained the same.

And this left Titania dissatisfied.

“It is time for a change,” she announced one evening over dinner. Oberon had known something was wrong the moment she dismissed the waiting staff. It had been over three hundred years since they had eaten alone, and even that was because Titania had wanted to discuss the idea of adopting another Changeling. Not that the idea had gone anywhere, of course. Oberon had learned his lesson about taking human children long before that, and he had not been keen to repeat the experiment. It was natural, then, that he held his breath when Titania spoke, and he waited for whatever she was about to decide. “We have become stale.”

Oberon found it impossible to disagree. Being married for a millennium was certainly an accomplishment by anyone’s count—especially when fairy marriages were annulled and then voluntarily renewed on an annual basis. But one thousand years of an arranged marriage was going above and beyond in his royal duties, of this, he was sure.

“What do you propose?” he asked, not entirely sure he wanted an answer. A separation from Titania might allow them both to pursue other interests, but there was no denying that a split in the Royal Court could rip the whole of his already unstable kingdom in half.

He nodded. He’d known where this was going, and he couldn’t say he was particularly unhappy about it. But he had questions.

“Why now? We’ve been living this same way these last three hundred years. Why propose this now?”

“It is the best possible time. The kingdom is at risk of civil war…”

“…Which is exactly why we should be united.”

“Or is it why this is the ideal time for a split? We would not want to needlessly disrupt harmony in the kingdom. Ergo, if we split while there are already fractures…”

“…we guarantee a split in the kingdom.”

“We hurry along a split we already know is coming.”

Oberon closed his eyes and shook his head. Titania had always been ruthlessly logical. It was one of the reasons his father had chosen her as a perfect mate, and—more importantly—a future queen.

“I have met someone else.”

Well, that was the clincher, wasn’t it?

“I have fallen in love.”

“Love?” Oberon frowned at his queen, unsure of exactly what he was hearing. “What of love? We are a king and a queen. Love need play no part in anything.”

“Oberon, even the mortals have abandoned that way of thinking now. It is time for us to catch up.”

Oberon grunted. It pained him to hear Titania speak of love. She’d not as much as breathed the word in five hundred years, not since his trick to cause her to fall for the human Bottom.

“This love. It is not the human, is it?” he asked. “The actor.” His voice dripped with venom as he spoke, though he himself wasn’t sure if he was jealous that she had fallen with such ease or angry that his own magic had been the cause.

This time, it was Titania’s turn to shake her head, causing blossoms of pink and orange to fall from her hair and hit the ground.

He stood at the window of his tower, having vanished the glass to get a better look at what was going on. He watched as Titania loaded her trunks onto the glass chariot. He watched as a male fairy, face obscured by some of Titania’s trickery to stop him from being identified, helped to pile the heavier pieces of furniture. He watched as the two of them climbed into the chariot, and as the dragonflies took flight, pulling it into the woods and out of sight.

Ultimately, he chose to do what many do when they find themselves bereft, and he began to prepare himself for bed. He removed his emerald-green robes and ran a damp washcloth across his torso. His muscles contracted at the cold, tightening and becoming more defined than they usually were when hidden beneath his loose robes. Usually, he enjoyed the feeling of his tightening body, but even that was little comfort in the light of being left alone. He unwrapped the leather strap that ran across his waist—a symbol of his perpetual commitment to his kingdom—and draped it across the wooden dressing table. He dipped the washcloth in the water again before removing his loincloth and washing the rest of his body. It was only right to be clean before entering the kingdom of the DreamWeaver, and he was not about to abandon formality and politesse just because he would be alone in his bed tonight. Naked, but dry after patting the water away with a towel, he knelt by his bed.

He stood and climbed into bed, pulling his mouse pelt blankets over him, and curled up into a ball. Scrunching his eyes together, he willed himself to sleep. It didn’t come easily, as visions of Titania and her paramour danced through his head, but eventually he found himself drifting off.

Doreen Heron is a writer who is finally living her dream in Cornwall, England. She is lucky to live in the county she loves, and to be using her writing to entertain her readers.

One lucky winner will receive a $10.00 NineStar Press Gift Code!