Release Blitz: Tripping Over The Edge Of Night by Layla Dorine

Tripping Over The Edge Of Night | Layla Dorine 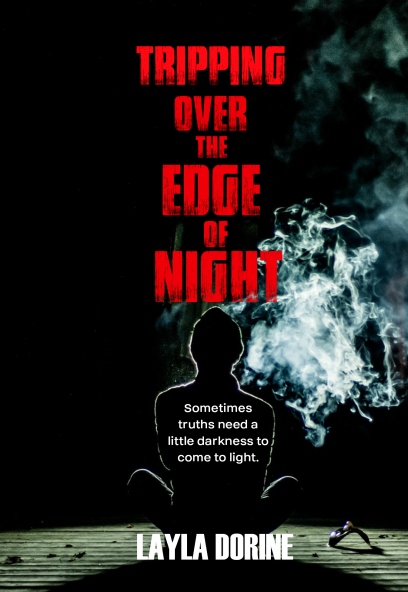 When Derrick received the phone call informing him of his mother’s death, it felt like the bottom had dropped out of his entire world. Gone was every hope and ideal he’d left home with, replaced with the bitter realization that he’d run out of time, run out of plans, and was desperately close to running out of give-a-damn.

It doesn’t help to come face to face with his older brother, Ray, who’d spent much of his childhood either ignoring him, ditching him, or complaining about his very existence. It’s enough to send him right back on the road again, or at least, it would have been, were it not for a house, a cat named Slash, and Mason, his best friend-with-benefits, now the head librarian in town and hot as sin.

It was hard enough leaving Mace in the first place, but a second time? He didn’t think he had it in him to be so heartless. Twelve years ago he’d slipped away under the cover of darkness, without even a single goodbye.

Now, standing on the edge of night, looking down at the tiny town he’d fled, Derrick is left with one burning question: Can the door to the past ever be closed enough to allow space for the future?

“Are you seriously going to stay?”

Ray nodded, while Derrick waited for him to let go. While Derrick knew he could break free if he wanted to, a part of him would always be small and in awe of him, so he stayed, anxious and awaiting his words. Instead Ray nodded and continued to study him.

“Why don’t you come over Sunday? I’ll fire up the grill and we can watch football and catch up.”

It was only at the sound of the can clattering against the floor that Derrick moved, jerking backwards, looking down, stunned to see three cans in a pile and one rolling away.

“Go get it before someone breaks their neck. I’ll get these.”

Derrick scurried off before his brain could bristle at the tone his brother had used, bossy fucker. Carrying the can back, Derrick saw Ray watching him, like he was trying to figure something out.

“Thanks,” Derrick muttered as Ray passed him the cans and he transferred them to the basket.

“Like I said, food, football, finding out what’s been going on with you for the past few years. It’s not like you were good about calling anyone but Mom and I doubt you’d have even done that if she hadn’t insisted on hearing from you once a week.

“I was hard on phones,” Derrick muttered.

Ray took a deep breath and let it out slow, apologizing before Derrick could retort.

“Whatever. Seems to me you’re spoiling to get into it so go ahead.”

“We missed you. We worried. It seemed like you were always moving and giving Mom a new address and she just didn’t understand what was going on. Why you seemed so…”

“So, what, Ray? Come on, spill it. You’ve already gone this far, you might as well finish it.”

“Haunted, okay,” Roy blurted. “She thought … did someone hurt you, or threaten you? She wanted to ask and didn’t know how. I wanted to ask but every time I talked to you, we ended up in an argument.”

“And whose fault was that?” Derrick snapped, shaking his head as he took a deep breath and tried to calm down.”

“Well then, I don’t know what else to say. I know I wasn’t the best brother. I could have spent time with you without griping about it. I could have included you and not ditched you at the library every chance I got. I remember how curious you were, always asking questions. I should have answered them without getting annoyed. I could have encouraged you and instead I was harsh and cruel and I’m sorry for that. I was the only kid for so long and I was jealous of you. Am still jealous.”

“What the hell do I have for you to be jealous over?”

Well shit, grocery shopping had just gotten a lot harder than he could have ever foreseen.

LAYLA DORINE lives among the sprawling prairies of Midwestern America, in a house with more cats than people. She loves hiking, fishing, swimming, martial arts, camping out, photography, cooking, and dabbling with several artistic mediums. In addition, she loves to travel and visit museums, historic, and haunted places.

Layla got hooked on writing as a child, starting with poetry and then branching out, and she hasn’t stopped writing since. Hard times, troubled times, the lives of her characters are never easy, but then what life is? The story is in the struggle, the journey, the triumphs and the falls.

She writes about artists, musicians, loners, drifters, dreamers, hippies, bikers, truckers, hunters and all the other folks that she’s met and fallen in love with over the years. Sometimes she writes urban romance and sometimes its aliens crash landing near a roadside bar. When she isn’t writing, or wandering somewhere outdoors, she can often be found curled up with a good book and a kitty on her lap.