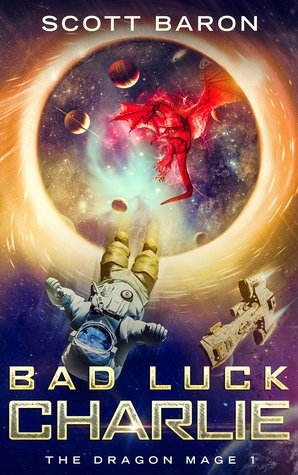 Charlie Gault had all the luck. Unfortunately, it wasn’t the good kind.

It was looking like Lady Luck had quite a grudge against him. In fact, at this point merely crashing the multi-billion-dollar ship he had helped design would have felt like winning the lottery compared to his current dilemma. If only he were so lucky.

Things had started off all right––that is, until a freak wormhole unexpectedly swallowed his ship, leaving him stranded on an unknown planet far, far from home.

With the crew’s lives at stake, Charlie had no choice but to stop his whining, put on his big boy pants, and step up to save them all, and much to his surprise, it actually looked like he might succeed. Of course, that was when things really went sideways in ways that made merely crashing on an uncharted planet seem like a walk in the park.

Suddenly faced with alien space pirates, talking dragons, and something that seemed very much like magic, Charlie found himself adrift, feeling like a space age Robinson Crusoe––only his man Friday was a blue-skinned alien, and this wasn’t just a desert island. It was a whole new galaxy.

A native Californian, Scott Baron was born in Hollywood, which he claims may be the reason for his off-kilter sense of humor.

Before taking up residence in Venice Beach, he spent a few years studying abroad before settling into the film and television industry, where he has worked off and on for some time.

Scott not only writes, but is also involved in indie film and theater both in the U.S. and abroad.