Nick Andrews is back in England. He is a broken man, living on the streets and trying to cope with everything he’s been through. Nick thinks that his life is over, but then Tom comes along. Tom, who is handsome and wealthy and intent on making his acquaintance.

Nick ends up as Tom’s valet, a position that brings him to the remote estate of Ravensleigh. At Ravensleigh, he soon realizes that Tom and his family have a past laden with shadows. Nick regrets coming there, but at the same time finds it harder and harder to resist Tom’s advances.

Then one night, a stranger arrives at Ravensleigh. And Nick’s world is turned upside down once more.

Warning: This book ends with a cliffhanger. The series as a whole will have a HEA ending.

Two nights later, Arlington returns to the coffee house. He doesn’t show up until late—half an hour before closing he saunters in and sits himself down close to the fireplace. He takes a long look around the room, removing his hat and straightening the black ribbon holding the curls of his wig together at the neck. There’s only one other customer left, so Nick isn’t busy. He has no excuses.

“Just a little,” Arlington says as Nick starts pouring him coffee. “Too much of this late in the evenings and I get no sleep until morning.” He smiles. “How about you, Mr. Andrews? Is coffee to your taste?”

Nick looks down at his hands. “No.”

“How expected!” Arlington chuckles. His fingertips run over the brim of the cup, tracing the edge. “Have you tried it? Surely Mr. Goodall has offered you some?”

“Don’t want to,” Nick mutters, and hurries away. When he enters the back room with some dirty dishes Goodall is there, rummaging for something in a cupboard. The room is dim, and so small that there’s barely space for both of them.

“No good, that one,” Goodall says under his breath. As if Nick didn’t know already that Mr. Arlington is no good.

Goodall is quiet for a moment. “Oh, it’s rumors,” he says at last, getting to his feet. “Nothing for a young boy like you to hear.” 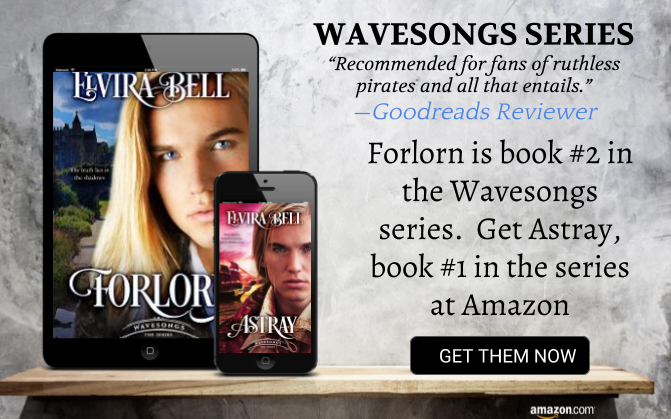 Elvira Bell lives in Sweden and spends most of her time writing, reading or watching movies. Her weaknesses include, but are not limited to – vintage jazz, musicals, kittens, oversized teacups, men in suits, the 18th century, and anything sparkly.

Elvira writes m/m fiction with a touch of romance and has a penchant for historical settings. She adores all things gothic and will put her characters through hell from time to time because she just loves watching them suffer. It makes the happy endings so much sweeter, after all.