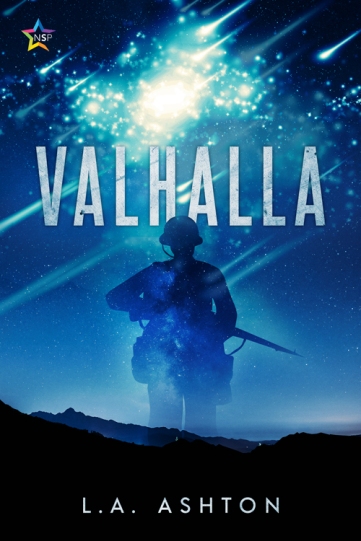 Sakuma has served as a Valkyrie for centuries, smoothly escorting thousands of souls to the grand halls of Valhalla. While the world tears itself apart during WWII, he is summoned to retrieve the soul of a fallen Japanese soldier, Ishii Hiroshi. To Sakuma’s surprise, Ishii refuses his invitation to eternity.

The two meet again and again as the war repeatedly sends Ishii to death’s door, and what should have been a fleeting encounter becomes something much greater for the both of them.

Sakuma is determined to give Ishii the reward he so deserves, but Ishii’s stubbornness may condemn him to an eternity outside Valhalla.

Sakuma stared down through the floor, past his feet, through the crack in his dimension. Beyond the collisions and splits of galaxies, Earth’s thrumming pulse called to him. There lay his charges—the human souls he would collect so they might rest easy in Valhalla.

He felt the tug in his chest, the pull of someone destined for his collection, and spread his wings wide before plunging through the rift that linked their worlds. With wings tucked at his sides, stars became burning streaks of light. The universe blurred and twisted, an orb of hazy blue its only clear constant.

Earth had erupted into a time of war, and Sakuma and his fellow Valkyrie labored for the sake of human souls. They saw the hidden crevices and shadows of war no one wanted to see. The world wilted before their eyes, and the bloodstained present turned the future bleak, and dark. But they also saw triumph, and sunrise after sunrise starting the day anew. They saw the look on every soldier’s face as they realized death wasn’t the end.

Sakuma punctured Earth’s atmosphere, and the smells of the lands and seas gusted against his face. His eyes softened at the reflective sparkle of the ocean; it was a beautiful sight, an unchanging thing that rose and fell under the press of the moon rather than the press of humanity.

The ground approached fast. Sakuma felt the tremble of the soul before his eyes could discern who it belonged to, but then—yes. Sakuma’s wings flared outward, body halting so immediately it dissolved the idea of impossibility.

Tanks, empty bullet shells, and discarded guns were strewn across the ground. Machines and bodies littered the battlefield as if they carried the same value. The acrid stench of gunpowder resisted the wind and hung in the air, a trail left in the wake of Axis and Allies. Sakuma looked down at his charge. The man stared up at him, eyes wide and unblinking. He was bleeding, his uniform more crimson than not, and he shook with such ferocity that Sakuma could hear it in his breaths.

Sakuma knelt down and offered his hand. The man blinked, his lashes coercing loose the tears still clinging to his eyes.

“You’ve done well,” Sakuma told him. He held his outstretched hand steady as his wings flapped at his back. “Let’s take you away from this.”

The soldier gawked at Sakuma’s wings before bringing his eyes down to the offered palm. He immediately grabbed hold, the sensation firm and warm against Sakuma’s skin. Good. He’s ready.

Sakuma curled his fingers around the man’s hand and lifted. As the soldier rose, the flesh of his hand fell away and lowered to the ground. What was left gripping Sakuma’s hand were tendrils of light in the purest, lightest blue.

Strings of energy knit together to form fingers, and arms and shoulders wound away from the confines of a body to become iridescent limbs. Sparkling light ghosted from the soldier, lifting past his body as his human form sighed its last breath. The human didn’t notice the transition. He only smiled, and that smile was lit with the radiant energy of life. Sakuma grabbed his other hand to steady him, and there was a discernible purr of peace.

Sakuma spread his wings, took a breath, and shot them into the air.

He kept his eyes up as they sailed through the Earth’s sky and broke through the seal of the atmosphere. But once they were careening through space, breaking apart time and dimensions, he liked to watch their faces.

Every man thought he knew true beauty. And then every man saw the infinite expanse of space, and they realized they’d been wrong.

Gas, dust, and rock were turned perfect and ethereal in the silence of space, backlit by millions of stars. Galaxies wound into spirals, blues warmed into reds around a sun, purple and green congealed in overheated leftovers of a supernova.

Sakuma watched the faces of the humans he brought, their newly transcendent form experiencing their first taste of eternity.

Eventually, he left them at the gates of Valhalla. There they could take the seat reserved for them—a place promised to true warriors for the rest of time.

Hands now freed, Sakuma turned to gaze into the black. Somewhere beyond that void, there was a pulse. Another life had found a heroic end. Sakuma smiled, spread his wings, and plunged back toward Earth. 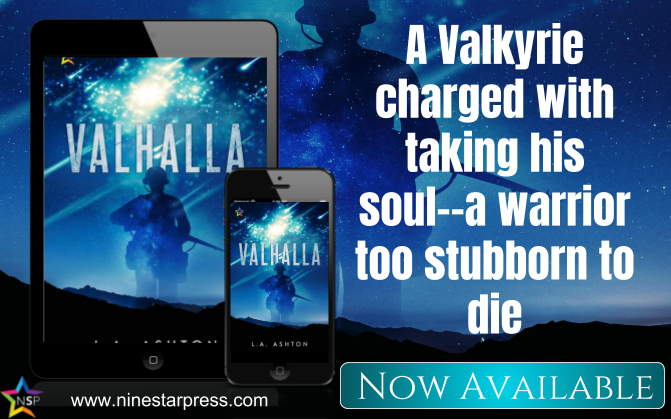 L.A. Ashton is an LGBT+ author writing LGBT+ fiction. They enjoy rock music, traveling, and anything else that adds color to their daydreams.

They believe in the healing properties of art and of having a cat firmly stationed on one’s lap.