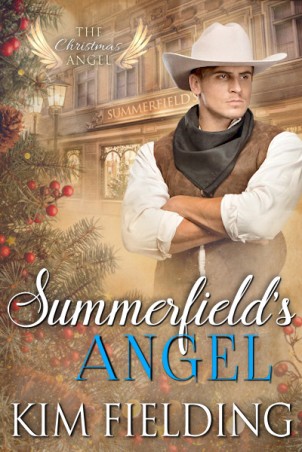 In 1750, a master woodcarver poured all his unrequited love, passion, and longing into his masterpiece—a gorgeous Christmas angel for his beloved’s tree. When the man he loved tossed the angel away without a second thought, a miracle happened. The angel was found by another who brought the woodcarver True Love.

Since then, the angel has been passed down, sold, lost and found, but its magic remains. Read the romances inspired by (and perhaps nudged along by) the Christmas angel through the years.

After the hard winter of 1888 ended Alby Boyle’s work as a Nebraska ranch hand, he returned to New York City in search of his long-lost family. His mother and brothers are nowhere to be found, however, and after Alby’s years of absence, Five Corners no longer feels like home. His prospects seem as dim as the nighttime alleys.

But for Alby to achieve his dreams of love and a real home, well, that may take a bit of holiday magic.

Kim Fielding is the bestselling author of numerous m/m romance novels, novellas, and short stories. Like Kim herself, her work is eclectic, spanning genres such as contemporary, fantasy, paranormal, and historical. Her stories are set in alternate worlds, in 15th century Bosnia, in modern-day Oregon.

After having migrated back and forth across the western two-thirds of the United States, Kim calls the boring part of California home. She lives there with her husband, her two daughters, and her day job as a university professor, but escapes as often as possible via car, train, plane, or boat.

This may explain why her characters often seem to be in transit as well. She dreams of traveling and writing full-time.