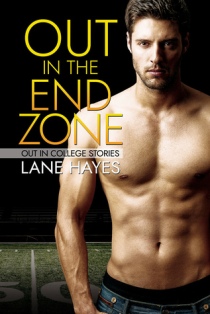 Out in the End Zone by Lane Hayes

Review tomorrow when I’m at the laptop.

Weeee, this was a delight. It overlaps with book one in the series but can still be read as a standalone. I loved Evan and Mitch.

Evan was like a giant puppy, eager but naive and sensitive and, once his past was revealed, it made perfect sense.

Mitch was just a great character, he’s out and proud and happily living his life without complications, but he’s also vulnerable, apart from his grandmother, he’s never been put first as a priority, both his parents essentially abandoning him for their careers.

There’s just a really sweet romance at the heart of this “fake” boyfriends trope when it becomes clear that pretending to have a relationship – so Mitch can use the YouTube videos for his final year project on the impact of social media – not only isn’t a hardship but, for Evan, is becoming the central part of his life.

I will say, Evan also frustrated me for a long time but, once I knew what happened in his past, it became crystal clear why he behaved as he did. It’s not horrible behaviour, so no need to worry there! Just a wee angsting about accepting his bisexuality.

Also, there was a brief bit of plotline which just didn’t seem to go anywhere and, while I got that it was a bit more background to the big reveal later, I think it may have benefitted from a small follow up reference as to whether Evan did anything or not about it. Sorry to be cryptic but it’s a fairly big spoilery type thing!

Even though these guys are college age at just 23, I firmly believed in their Happy Ever After and can quite easily picture them muddling along together for the rest of their lives.