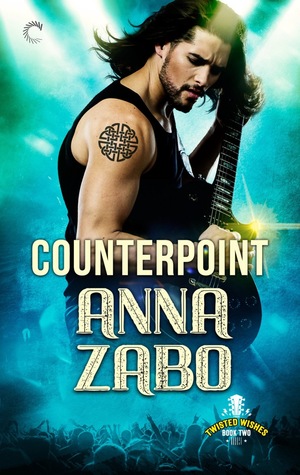 But behind his tight leather pants and skull-crusher boots lies a different man entirely, one who needs his stage persona not only to perform but to have the anonymity he craves. A self-imposed exile makes it impossible to get close to anyone outside the band, so he’s forced to get his sexual fix through a few hot nights with a stranger.

When computer programmer Adrian Doran meets Dominic, he’s drawn to the other man’s quiet voice and shy smile. But after a few dirty, demanding nights exploring Dominic’s need to be dominated, Adrian wants more than a casual distraction. He has no idea he’s fallen for Domino Grinder—the outlandish, larger-than-life rock god.

Dominic is reluctant to trust Adrian with his true identity. But when the truth is revealed prematurely, Dominic is forced to reevaluate both his need for Adrian and everything he believes about himself.

Tropes and Themes: Secret Identity. Geeks in love. hurt/comfort. Finding yourself behind the mask you wear for others. 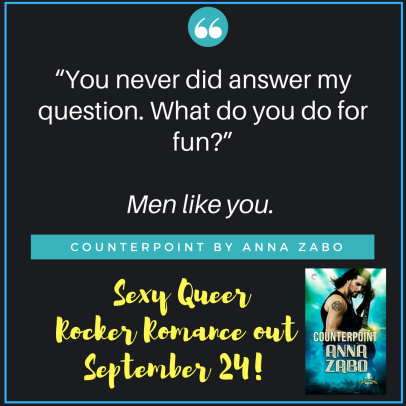 “Dominic,” Adrian repeated, as if rolling the sounds around in his mouth like one might wine. “Quite a pleasing name.”

That’s what made Dom shiver. Not Adrian’s hooded look or the wine that appeared or how Adrian sipped his drink and swallowed. Nope, what hardened Dom’s cock was the thought of his name—all three syllables—pleasing Adrian.

“Most people call me Dom.”

“Hmm.” Adrian set down his glass. “Would you mind if I called you Dominic?”
Not if he kept saying the name like that. “No, not at all.” And damn if his voice hadn’t gone husky. Dom took a gulp of his own wine. 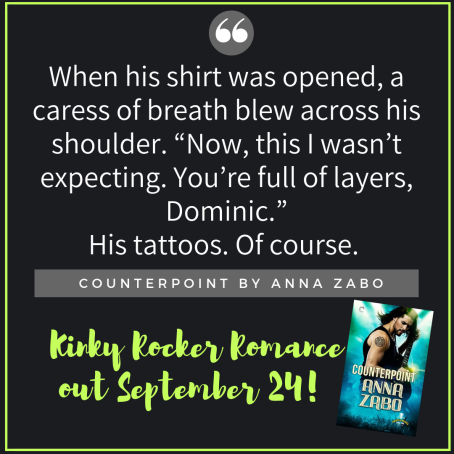 Anna Zabo writes contemporary and paranormal romance for all colors of the rainbow. They live and work in Pittsburgh, Pennsylvania, which isn’t nearly as boring as most people think.

Anna grew up in the wilds of suburban Philadelphia before returning to their ancestral homelands in Western Pennsylvania. As a child, they were heartily disappointed to discover that they couldn’t grow up to be what they wanted (a boy, a cat, a dragon), so they settled on being themself whenever possible, which may be a combination of a boy, a cat, and a dragon.

Or perhaps a girl, a knight, and a writer. Depends on whom you ask. They do have a penchant for colorful ties and may be hording a small collection of cufflinks. They can be easily plied with coffee.

Anna has an MFA in Writing Popular Fiction from Seton Hill University, where they fell in with a roving band of romance writers and never looked back. They also have a BA in Creative Writing from Carnegie Mellon University.

Enter to win 1 of 2 e-copies of reader’s choice of back catalog books by Anna Zabo. Must be 18 to enter and win. Open internationally.