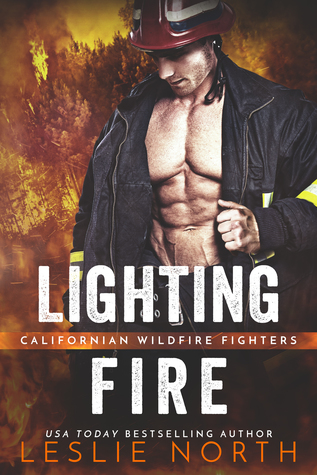 Sookie Logan is interested in one thing and Chase Kingston is not it.

A fiercely independent helicopter pilot for the National Guard, Sookie is back in her hometown to fly her copter and help fight a fire, not to hook up with some junior firefighter from Alaska.

Especially when this particular firefighter works for her brother, the one person in the world who’s let her down the most. The hunk in yellow & tan is off limits.

But when a date intended to just make her brother’s blood boil turns into much more, Sookie and Chase give in to their raging attraction. Both agree it’s a quick fling—something that will last only as long as it takes to knock down the flames threatening her town. Leaving Chase behind will be as easy as leaving her hometown was the first time. No attachments. No regrets.

Chase wasn’t looking for a hook-up and definitely not with his boss’s little sister. Besides, Chase isn’t about to fall for Sookie. Their “relationship” is all about the great sex, thank you very much—he’s been burned in the past and there’s no chance of a repeat. No way. Not even if Sookie is starting to get under his skin and he can’t seem to get that little firecracker of his head.

Just when Chase is beginning to believe they may have something real, the demons he’s been fighting for years come back with a vengeance, making a future between the two as unpredictable as the fire they’re fighting.

As the fire rages on, will Sookie and Chase douse their own flame? Or realize they’re meant to face any inferno together?

Leslie will be donating 5% of book sales in the first week to a Wildfire Fighting charity called Wildland Firefighter Foundation.

Leslie North is the pen name for a critically-acclaimed author of women’s contemporary romance and fiction.

The truth of the matter is she loves her fictional persona, Leslie North, more than her normal, day-to-day persona! Her bestselling books focus on strong characters and particularly women who aren’t afraid to challenge an alpha male. Inspired after years of travel, her stories are set all over the world, from the tough streets of Russia to the beautiful beaches of the middle east.

Leslie fell in love with romance when she first picked up a scrappy, dog-eared romance book from her local library. She began writing soon after and the rest, as they say, was history. She now lives in a cozy cottage on the British coast and enjoys taking long walks with her two Dalmatians, George and Fergie.

She LOVES reader feedback, and if you have any comments, don’t hesitate to contact her via e-mail: leslie@leslienorthbooks.com.