I hate cliff hangers! This AU historical has two of them… 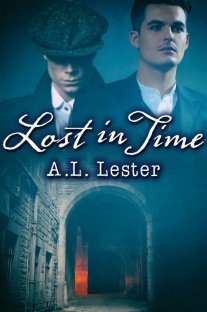 Lost In Time by A.L. Lester

Bloody cliff hangers, I hate them with a burning rage hotter than the sun. This book finishes with two of them – the paranormal element with a deadly creature on the run and also the potential relationship between Alec and Lew.

Other than that, it’s an intriguing story with its alternative reality London setting and the odd dislocation in time of one of the MCs in a post WWI setting.

I liked a lot of the narrative but there’s an awful lot of setting up going on in this book and no real conclusions for anything which left me a little frustrated and sometimes the time travel aspect of the story felt rushed or events just popped in to try highlight the “history”.

One example being the Sidney Street Siege, which oddly I know quite a bit about from my day job creating content for the new UK Police Memorial Trust’s digital version, which includes a history of British Policing.

I’m not sure why Sidney Street was picked as an event involving “creatures” given it was a straight up anarchist revolutionary conflict between Latvian criminals and the Met Police, which resulted in the deaths of three policemen, one gang member and a poor fireman who had the house collapse in him.

Hopefully book two will be out soon and we’ll get some further movement on the main thrust of the otherworldly elements. There was a sneak peek at the end of this one and Fenn from The Gate makes another appearance.